Broadwater Farm Exhibition Project 2010-2012
From Broadwater Farm Community Centre to Bruce Castle Museum
Broadwater Farm Estate dominates the skyline in Tottenham. While the story of the uprising that took place there is well known, the heroic struggle of the residents and community leaders who fought to bring about radical social change, working in partnership with politicians and local authority workers, is often forgotten. This project celebrates their enormous achievements, while considering the events that led up to the disturbances and the lessons that were learnt at the time.

In the wake of recent events when people are looking for answers, the issues addressed in this exhibition are more relevant than ever.

The Broadwater Farm Exhibition project, now on at Bruce Castle Museum, started in March 2010 and culminated in an exhibition at the community centre at Broadwater Farm in late October 2010 - 25 years after the troubles.

Broadwater Farm has been the focus of much attention over the years and the main purpose of the exhibition project, was to allow members of the community to choose for themselves what story should be told.
The exhibition has been compiled from a mixture of photographs, video footage and written material all sourced from members of the community, or local museums and institutions. There are also records of interviews with key players, both on and off the Estate, as well as other supporting material from that time.


This website was created as an online resource where you can hear some of the interviews with the community and see films made by children on the estate.
The aim of the website and the exhibition is to provide a platform where members of the community can talk about their heritage and their future.  It is hoped that a permanent space and archive can be created, where more material can be collected and added, as and when it becomes available.

The exhibition project could not have been possible without the support provided by members of the community, the Volunteering Services Unit at University College London, the Museum of London for kindly lending two display cases and Bruce Castle Museum. Special thanks to photographer James Burns. 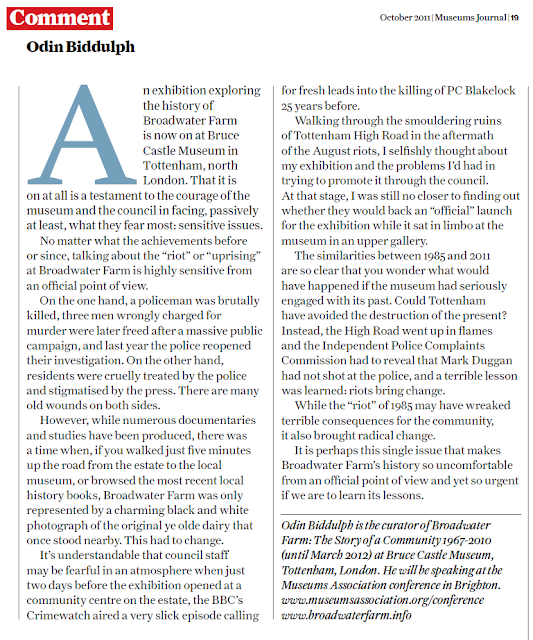 Broadwater Farm Exhibition
In 1985 Broadwater Farm experienced one of the worst nights of civil unrest anywhere on mainland Britain. It shocked the nation and nearly destroyed a community. Just months before, Diana Princess of Wales visited to congratulate the Broadwater Farm Youth Association on its success. Today Broadwater Farm is seen as a model of social housing, attracting visitors from around the world. This exhibition will explore the heroic achievements of a community who from the very beginning fought against all the odds. October 2010 at Broadwater Farm Community Centre. Now on at Bruce Castle Museum June 2011 to September 2012 - in the main gallery since April 2012.